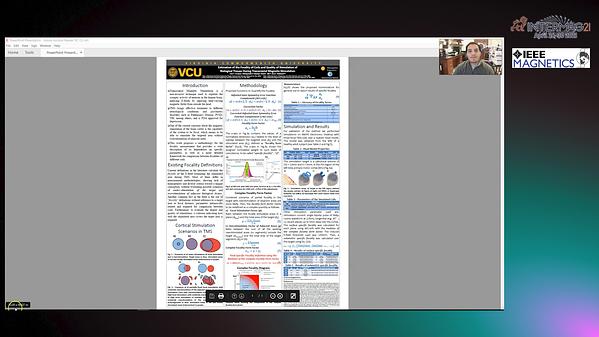 As one of the emerging neurostimulation techniques, the Transcranial Magnetic Stimulation (TMS) regulates the synaptic activity of neurons to treat several psychiatric conditions and neurological disorders. During TMS, E-fields are induced within the brain through the application of time-varying magnetic fields, using coils located outside the head 1-4. Different definitions are proposed in the literature to measure the focality of the E-field in the brain and estimate the stimulated area during TMS. However, most of them differ in measurement methodologies, showing lack of homogeneity and diverse criteria toward a unique conception, without evaluating possible scenarios of under or overstimulation of the biological tissue. Another common fact in the field is the use of definitions of “focality” without reference to a target area and/or focal distance, parameters intrinsically related and required for comparison between coils. Furthermore, to evaluate the degree of stimulation, a criterion indicating how well the stimulated area overlaps the targeted area is required. This work proposes a generalized function and methodology for the focality quantification in TMS coils, considering target area, focal distance, maximum magnitude and stimulation threshold. New definitions such as “specific focality (sf)” and “focality form factor (dn)” are introduced, seeking to describe the suitability of coils for specific stimulation applications. The proposed definitions also offer a general framework to compare coils using homogeneous methodology, parameters and nomenclature, with potential impact in the industry on the standardization of TMS measurement methods.
We have performed finite element simulations over an anatomically accurate human head model, including three of the common TMS coils in the literature (single circular coil, figure of eight coil and quadruple butterfly coil 5). The head model was built based on MRI of an adult healthy subject and defined by layer including the scalp, skull, cerebrospinal fluid, gray matter and white matter. All the layers were assigned typical electromagnetic properties reported in the literature. Magnetic flux densities and electric fields were obtained in the surface of the primary motor cortex (M1) using the head model, over the subregion that controls the first dorsal interosseous (FDI) muscle. Then, the introduced "specific focality" measure was used. This is defined as the normalized dimensionless focality based on new proposed mathematical functions. The functions designed are called Adjusted Even Symmetry Error Function Complement (AES-erfc) and Corrected-Adjusted Even Symmetry Error Function Complement (CAES-erfc). They define the focality as a quantity between zero and one (interchangeable to a percentage notation), as a function of the defined "focality form factor" (dn), a normalized ratio between the stimulated area and the targeted area. The result is a measurement system that identifies different scenarios of focal stimulation (dn=0), overstimulation (dn≥0), understimulation (dn ≤ 0) or no stimulation (dn=-1 in CAES-erf) see Fig.1. The calculated results of the specific focality over target areas and volumes were compared with other pre-existing measures in the literature, such as the area of the half-value (AE½) 6 and area of the half-energy (AEE) 67, for the surface specific focality Fig.2, table 1, and area of the half-value (A½) and tangential fields spread (S½) 6-7, for the volumetric specific focality Fig.2, table 2. Our study shows -consistently with other currently used measures- that the QBC is the coil with highest focality for the defined target, followed by the F8C. The proposed specific focality measure assigns a dimensionless value to each coil compared to results in surface units of existing definitions. With this new parameter definition, it becomes easier to evaluate the focality of a TMS coils in the context of a specific target area -or volume- and focal distance, as well as to identify scenarios of stimulation that is focal and with either understimulation or overstimulation with respect to the target size. 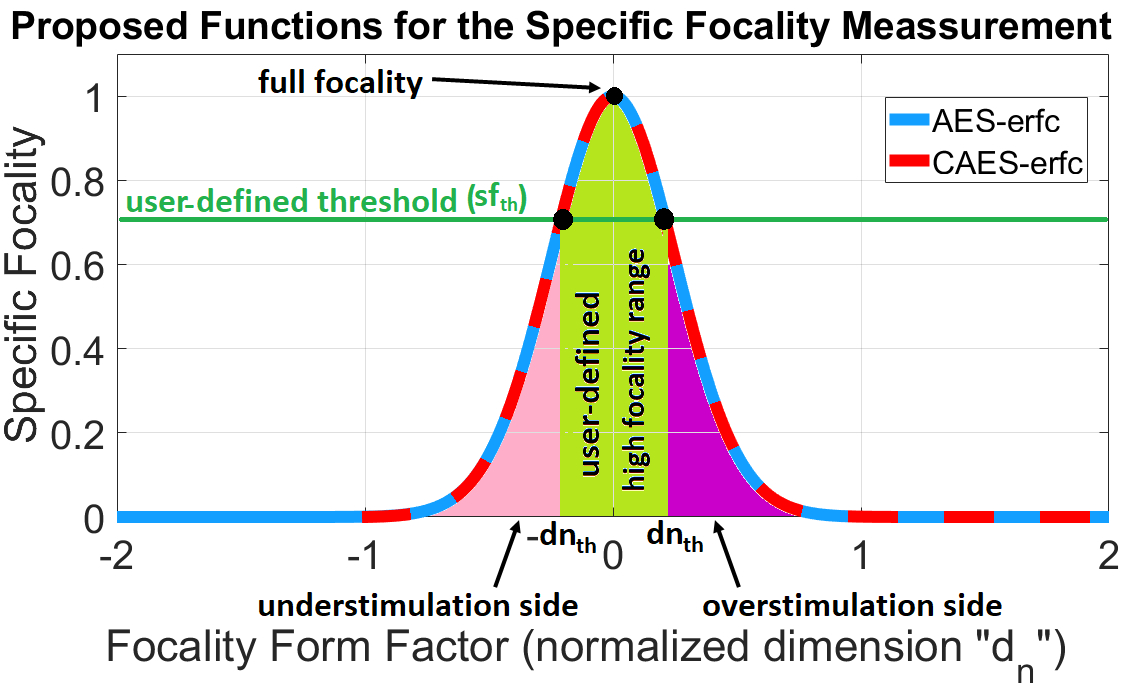 Fig.1. Proposed AES-erfc and CAES-erfc functions for the focality assesment. 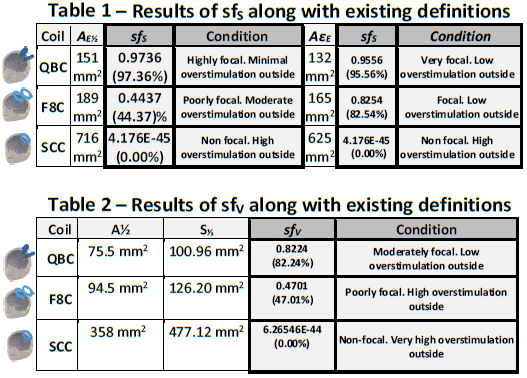 Transcranial Magnetic Stimulation (TMS) is a non-invasive technique of modulating the neurons of the brain. TMS is a tool in cognitive neuroscience for studying neuronal connectivity and brain mapping. It is also approved for the treatment of neuropsychiatric disorders 1. It functions on the principle of electromagnetic induction in inducing electric field in the neurons of the brain. With TMS studies, accurate estimation of the induced E-Field is usually necessary. This, however, requires a lot of processes, which include the three-dimensional head model generation from magnetic resonance imaging (MRI) scans using the SimNIBS software 2 and finite element analysis to calculate the induced E-Field (Fig. 1). These processes are time-consuming and computationally expensive. Additionally, with each head model's uniqueness, outcomes cannot be generalized across a particular population as the intensity of E-Field is subject-specific 3, 4. A few studies have explored the use of artificial neural networks to estimate the electric field from T1 MR images 5, 6, 7; however, none has considered the effect of different coil geometry in their estimation. In this research, the authors develop a deep neural network (DNN) model to determine the induced E-Field directly from the patient’s MRI scan and across different coil types. We trained neural network models from realistically anatomic head models’ and across 16 different coil type to predict the induced electric field in the brain and scalp (E-Max brain and scalp) and the volume of stimulation of the brain and scalp (V-half brain and scalp) from T1 MR images and specific coil type. Using Deep Neural Network (DNN), the processing and estimation time for the induced E-Field is measurably reduced, which is helpful both to clinicians and researchers as the need to create subject-specific anatomical head structures is eliminated. This will also be beneficial to the TMS patients as there will be no need for additional stimulation sessions with the different coil types as the DNN network is able to predict the outcome from each coil type. The other advantage of the DNN model is that the E-Field from the different coil types can be compared simultaneously. Preliminary results for the E-Max brain report a correlation coefficient of 0.93 for the training dataset and 0.88 on the test dataset, as shown in the parity plot in Fig. 2.

Fig. 2. Parity Plots of the E-Max Brain for the Test and Training dataset.

JP-10 - Transcranial Magnetic Stimulation: The Effect of Age and Other Factors on the Intensity of the Quadruple Butterfly Coil

Transcranial Magnetic Stimulation (TMS) is a non-invasive technique that is approved by the U.S. Food and Drug Administration (FDA) for the treatment of certain neurological disorders 1. When comparing TMS to techniques with similar desired outcomes such as conventional brain surgery, TMS has far fewer risks due to its non-invasive nature. TMS works by inducing an electric field that polarizes or depolarizes brain tissues depending on treatment mode. TMS researchers have proposed different coil designs to achieve higher focality and increased depth of penetration of the induced electric field 2. The Quadruple Butterfly Coil (QBC) is a novel coil design with increased focality when compared to the commercially available Figure-of-eight (FOE) coil 3. The human brain reaches 90% of its adult volume at age six and does not reach full maturity until approximately the age of 25, and throughout adolescence, the brain is still maturing 4. The differences in the brain from adolescents to adults could affect the effectiveness of TMS, mainly because the coils have been designed for use on adult patients 5, 6. Comparing the efficacy of TMS coils across age groups to determine if the difference in brain volume is enough to warrant specific TMS treatment protocols for adolescents is of the essence in advancing TMS research 7. In this research, the authors compare the use of the Quadruple Butterfly Coil (QBC) across different age groups to test the effectiveness of the coil on various stages of brain development. Simulations were run using a finite element analysis software, Sim4Life. The models used in this study were sourced from the Computable Virtual Population Models from the IT’IS Foundation. The models have well defined anatomy and were selected to each represent a different age group. The adult models used as the control are 34 years old male (34M) and 26 years old female (26F), as they both fall in the typical age range of models (25 to 35 years) used for TMS studies. The models used to represent the pediatric population are 14 years old male (14M), 11 years old female (11F), 8 years old female (8F), 8 years old male (8M), 6 years old male (6M), and 5 years old female (5F) 8. Fig. 1 presents the distribution of the induced electric field intensity with depth across the different models. Besides age and brain volume, other factors such as the brain – scalp distance (BSD), cerebrospinal fluid (CSF) thickness, scalp thickness, and skull thickness of the models were also considered in the analysis. This study provides an understanding of the various factors contributing to the response from TMS. The maximum electric field intensity on the scalp (E-Max scalp), maximum electric field intensity on the brain (E-Max brain) and the proportion of the E-Max scalp to E-Max brain are parameters considered in this analysis. 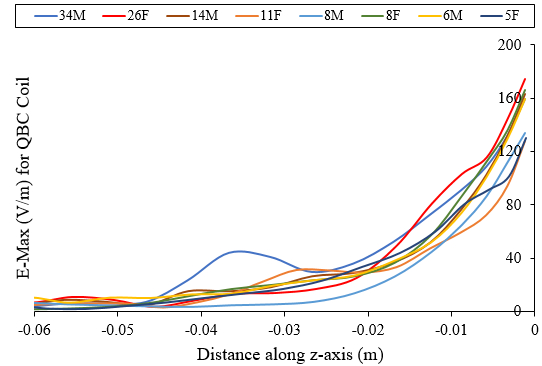 Fig. 1. Variation of the Induced Electric Field (V/m) with depth across the different subjects. 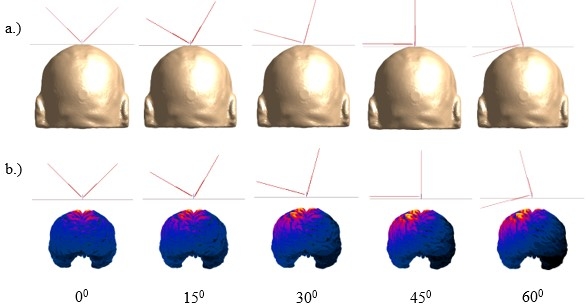