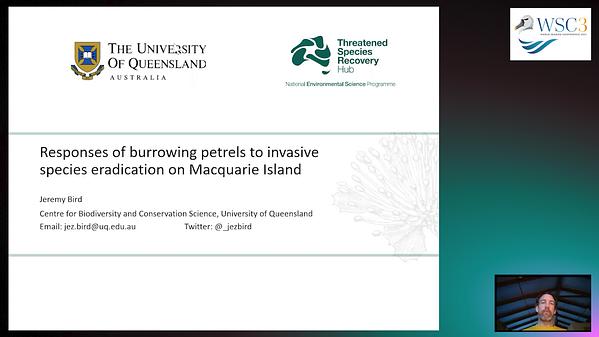 Invasive alien species are the most prevalent threat to seabirds worldwide. Recent syntheses demonstrate the progress that has been made in tackling this threat and facilitating seabird recovery, but they've also highlighted deficiencies in outcome monitoring. Australia's Macquarie Island, a Tasmanian State Reserve and World Heritage Site, has received major conservation investment for the management of invasive predators. The eradication of rabbits, rats and mice in 2011-2014 is the second largest eradication globally to date. One of the main motivations for pest management was to improve the status of nationally threatened seabird populations, although no specific recovery targets exist. We report the results of a three-year study to quantify short-term post-eradication responses of four burrowing petrels and consider longer-term responses based upon current trajectories. Blue Petrels and Grey Petrels were virtually or entirely extirpated from mainland Macquarie Island in the 20th Century. Population size, range and breeding productivity suggest both species are now increasing faster than the natural rate of population growth with immigration likely augmenting their populations. Antarctic Prions and White-headed Petrels remained extant in the presence of invasive predators, although their populations were in decline in the 1970s and had low productivity. There is little evidence of range expansion by either species, but contemporary estimates of both populations are an order of magnitude higher than the only previous island-wide estimates from the late 1970s. Current breeding productivity suggests their populations are now increasing. Our study provides quantitative evidence of population recovery and suggests pest management has achieved a short-term outcome of improving the status of nationally threatened seabird populations. However, we also find that current populations are well short of potential carrying capacity in this island ecosystem, something we may adopt as a longer-term objective of pest management.