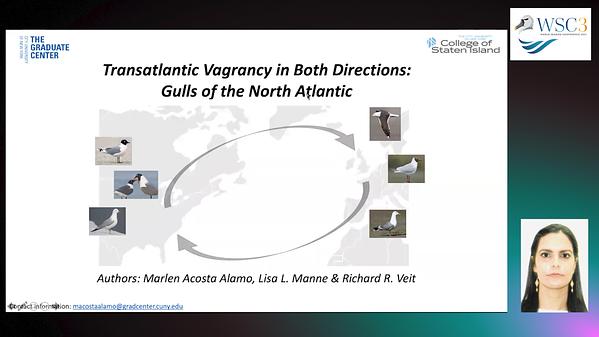 Transatlantic Vagrancy in Both Directions: Gulls of the North Atlantic

European gulls Chroicocephalus ridibundus, Larus canus , and L. graellsii have dispersed to North America and all of these except L. canus have bred or attempted to breed. At the same time, North American gulls L. delawarensis, Leucophaeus atricilla, and Leucophaeus pipixcan have dispersed to Europe, although no successful breeding by non-hybrid pairs has yet occurred. We extracted data from the journals North American Birds, British Birds, and several regional ornithological works to examine how transatlantic vagrancy varies year to year and test the hypothesis that population size in the source area predicts vagrancy in the receiving area. We performed a model selection between generalized linear and generalized additive models. At the within-species level, we repeated these analyses for regional populations of L. delawarensis. For both the between-species comparison, and for the within-species comparison, we found moderate support for our hypothesis. We discuss the implications of our findings for the ability of gulls (and other organisms) to adapt to changing climate through exploration of potential new habitats.