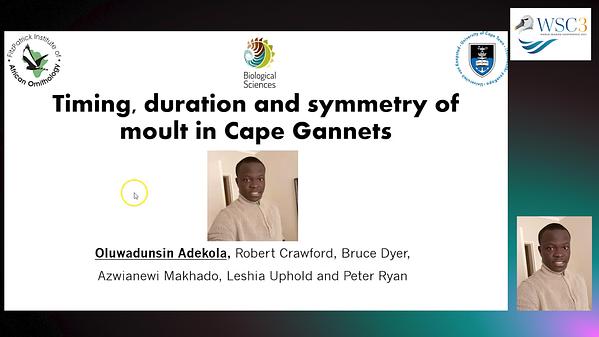 Timing, duration and symmetry of moult in the Cape Gannet Morus capensis

Little has been reported on moult in sulids, including gannets. The Cape Gannet Morus capensis is an endangered seabird endemic to southern Africa. We describe the timing, duration, symmetry and sequence of flight feather moult in Cape Gannets from two breeding colonies and assess whether moult can be used as an index of condition. Using the Underhill-Zucchini model, we estimate moult parameters based on the proportion of feather mass grown. Adult Cape Gannets began primary moult at the beginning of January (2-3 January ± 28 days SD) at both colonies. Primary moult is protracted, with multiple active centres (mean ± SD 1.8 ± 0.8, range 1-4) and 2.0 ± 0.9 feathers growing at the same time (range 1-5). Primary moult is suspended by early June at Malgas Island (estimated duration of moult ± SE, 153.9 ± 4.1 days) and late June at Lambert's Bay (176.5 ± 5.5 days). Secondary moult commenced in late January and proceeded from two nodal points. Despite more secondaries (3.3 ± 1.9, range 1-8) being grown simultaneously than primaries, 8% of birds were still moulting secondaries at the start of the breeding season. However, it was not certain that these individuals were breeding. Tail moult also overlapped with that of the primaries, with multiple active centres (2.7 ± 1.2, 1-6) and 2.9 ± 1.3 feathers growing at the same time (range 1-8). Almost all primary (98%) and secondary moult (97%) was symmetrical, but there was little symmetry in tail moult (54%). Rectrix symmetry tended to be greater among gannets at Malgas Island (T1: 58%; T2-T6: 67-73%) than at Lambert's Bay (T1: 50%; T2-T6: 55-66%). Differences in moult duration and perhaps asymmetry between locations may be linked to foraging conditions, given that Lambert's Bay gannets are thought to be under greater food stress than Malgas birds.

¹University of Cape Town, ²Department of Forestry, Fisheries and Environment