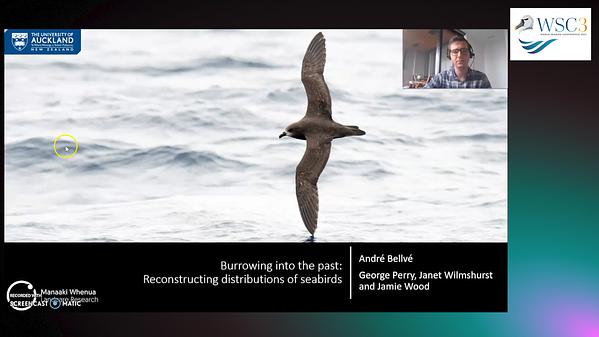 Burrowing into the past: Reconstructing the prehuman distribution of New Zealands seabirds

New Zealand (NZ) has been called the 'seabird capital of the world', with nearly 25% of the world's species occurring there, and 10 % of global seabird species only breeding in NZ. Seabirds play a key role in coastal and terrestrial ecosystems by importing marine sources of phosphorus. In New Zealand ecosystems this role is particularly important as phosphorus is a limiting nutrient, making seabirds a key agent for nutrient cycling. Despite contemporary seabird diversity and abundance appearing high in NZ, the fossil bone record reveals they were more abundant before human arrival c. 750 years ago and the subsequent plethora of mammalian predators that have been introduced in the last 200 years. The rapid demise of seabirds has meant that little is known about where they used to breed around NZ and the degree of their influence on native ecosystems, although in some places it is clear that some nutrient fluxes have collapsed. Here, I present species distribution models of contemporary and prehuman breeding sites for NZ's seabirds built using presence-only data. We collated records of seabird breeding colonies and aggregated them into functionally similar groups. Contemporary seabird presence data were combined with climatic and environmental predictors to predict the distribution of each functional group. The results of these present-day models were then used to hindcast onto prehuman paleo-environmental conditions (> 1000 ybp) to create maps of the distribution of each functional group. Understanding the past and present distributions of seabird colonies will inform us of which habitats they favour for breeding and the processes that have restricted their current breeding grounds. These distributions can also be used to guide conservation management decisions regarding the most suitable sites for habitat restoration and translocation. Moreover, identifying past and present breeding sites will provide a basis for characterizing the change in nutrient flux dynamics, which are an integral component of NZs forest ecosystems.